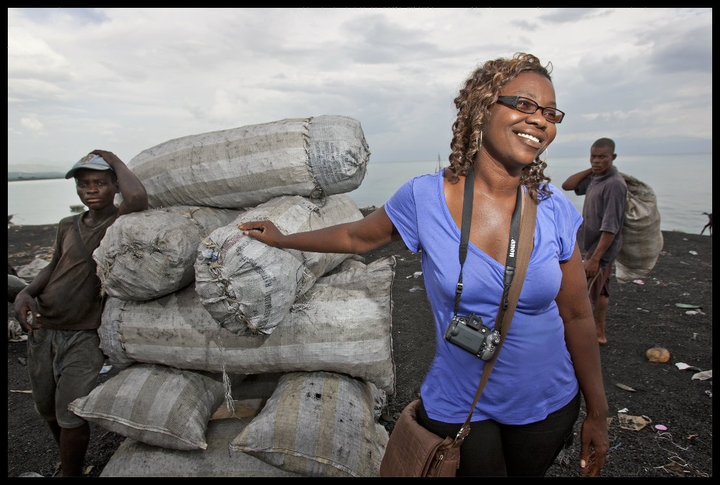 Jacqueline Charles is an awarding winning journalist and the Caribbean correspondent for the Miami Herald.  Charles has covered Haiti for over 10 years - reporting on its people, natural disasters (2008 hurricane) and political upheaval. She traveled to Haiti the day after the devastating January 12th earthquake and since then has continued her reporting on Haiti's reconstruction.

Erin Burnett OutFront producer Leinz Vales poses a few questions to Charles about her experience reporting on the frontlines of Haiti's most devastating natural disaster.

1. What is your most memorable story from your many years of reporting on Haiti?

CHARLES: There are so many stories, both tragic and hopeful, that I've reported over my many years about Haiti. It is difficult to choose one standout. But if I were to go back to the earthquake, there are two that stand out for me. The first is the story about funerals that spoke of my own loss after the disaster. It was "inspired" by both what I saw, formal funerals suddenly taking place again weeks after the quake, and the sentiments of a Haitian doctor who was coping with the tragedy by helping others.

The other story is the one about the women who were driving the tractors and other heavy equipment to clear the roads of rubble and recover the bodies. It demonstrated that Haitians did help Haitians in the aftermath, and it also told the story of the ongoing struggle of women in Haitian society to achieve social empowerment and financial independence. Women have long carried and continue to carry this country on their backs, and that needs to be highlighted.

2. What are your thoughts on how Haiti is moving forward since the January 12th earthquake?

CHARLES: The struggle continues. Camps are cleared, and tents are hard to find in some communities. But have lives improved? Are conditions today the same as they were on the 11th of January 2010? That is the question that must be asked. Even before the quake, 2 million Haitians were living  precariously in substandard conditions. Unless jobs are created to help Haitians improve their own lives, then these will only be band-aid solutions and many of those helped out of the camps will once again find themselves homeless.

CHARLES: As someone born of Haitian descent outside of Haiti in the English-speaking Caribbean (Turks and Caicos) and partly raised in the United States (Miami), I find this to be a huge advantage in reporting on Haiti. It provides a certain perspective and a critical lense to examine what's happening before me. When I am working, I am first and foremost a journalist, something often lost on readers. My job is neither to defend, nor make excuses for what's happening but as someone raised in the culture I am also able to provide a perspective that others aren't. Haitians are Haiti's biggest critics. They want to see improvement in the lives of the country's 10 million citizens. They want to see democracy take root. My job as a journalist is to hold leaders - regardless of who they are - to that.

CHARLES: A plan to work together. Until all of these groups figure out how to work together and come up with a blueprint for not just the country, but regions and communities, you will continue to see the same scattered development that exists.

5. What do you love about Haiti? What story do you think the mainstream media is missing out on?

CHARLES: What I love about Haiti is the beauty and the history. The country is not just one monolithic disaster pit. There are trees in the hills of Kenscoff, and Jeremie. Delicious chocolate in Cap-Haitien, a pristine, turquoise water in Chouchou Bay. The soil doesn't smell the same in the south as it does in the north, Kreyol has its own dialect, vocabulary in different parts of the country. I think we in the media sometimes are often too guilty of missing the upside. Yes, we have to report on the disasters and dangers but we also have to talk about the potential.