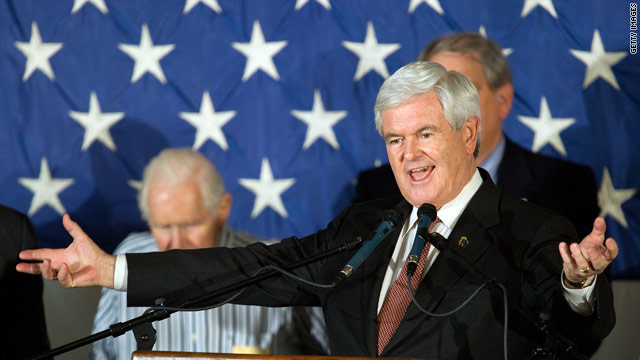 Republican presidential candidate Newt Gingrich, fresh off a dramatic win in South Carolina, is showing signs of a surge in Florida. A new poll out today puts the former House Speaker in contention for a win in the Sunshine State over rival Mitt Romney. As CNN Political Editor Paul Steinhauser explains:

According to a Quinnipiac University survey released Wednesday morning, Romney is at 36% support, with Gingrich at 34%, former Sen. Rick Santorum of Pennsylvania at 13%, Rep. Ron Paul of Texas at 10%, and seven percent undecided. Romney's two point margin is well within the poll's sampling error.

The survey was conducted Thursday through Monday, both before and after the South Carolina primary. Looking at the numbers for Thursday through Saturday, before the results of the Palmetto State contest were known, Romney had a 37% to 26% lead over Gingrich, with Santorum and Paul each at 15%.