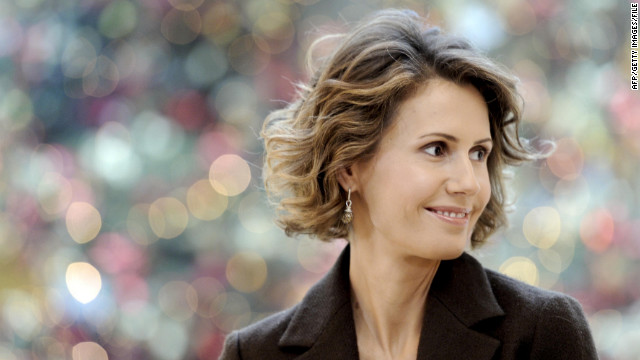 Asma al-Assad: fearless critic of barbarism, unless it's aimed at her own people

She was, until recently, the beautiful woman described as a "rose in the desert"; the very modern wife of a man seen by many as a very old-style dictator. As her country has burned–and her childhood home has become an international symbol of civilian suffering, indiscriminate killing and the deaths of journalists–Asma Al-Assad has remained silent. "I wonder how Syrian First Lady Asma Al-Assad, a Homs native, is reacting to the destruction of her city," wrote CNN's Ben Wedeman on Twitter this week.

It's not as if Assad, the British born beauty married to Syria's Bashir Assad, has never spoken out against brutality against civilians. In a 2009 CNN interview, Assad condemned Israel’s offensive on the Gaza as ‘‘barbaric’’ and warmly but firmly used her position ‘‘as a mother and a human being’’ to demand its end. ‘‘This is the 21st century. Where in the world could this happen? Unfortunately it is happening.’’

And it is happening again–in her own country. Yet she says nothing. She stands silent even, as Wedeman has noted, as her own home town is shelled into submission, with the majority of the dead civilians–many of them children–and international journalists. The body of one of those journalists, Marie Colvin, has yet to be returned to her family in the U.S. because the Syrian regime has refused to stop its assault on Homs long enough to allow independent groups to recover the bodies of Colvin and photojournalist Remi Ochlik, both killed during a rocket attack on Homs February 22.

Syria has instead sent in tanks and ground troops, cut off electricity and access to Homs, and ignoring a United Nations resolution condemning "systematic violations" against civilians.

Colvin's mother, Rosemarie, in an interview with Long Island newspaper Newsday, appealed to Asma Al-Assad's husband in words very similar to Asma's own: "do the decent, human thing," she said. "They are our children, they are human beings and we share that humanity with each other."

Were it any country but her own, it's easy to imagine Rosemarie Colvin finding a friend in Asma Al-Assad. For years, Assad was everything Syria wanted the world to believe about their country: beautiful, smart, modern, and compassionate. She was welcomed by politicans and Queens, and greeted by photographers' flashes from Milan to New York.

The Sydney Morning Herald described Assad as a "Louboutin-loving" fashionista who, "like other dictators' wives, live glamourous lives" that "earn them fawning spreads in western fashion magazines like Vogue. But at home they inspire dread, with tales of confiscating people's homes and punishing servants with boiling water."

As the Herald notes, the London raised former banker–fully at home at events like New York Fashion Week–had earned Syria glowing headlines. "French Elle had recently voted Asma 'the most stylish woman in world politics', Paris Match called her 'an eastern Diana, a 'ray of light in a country full of shadow zones’."

The days of fluffy profiles and frilly adjectives seem well and truly over as Syria's "shadow zones" have served up daily images of nauseating brutality.

As The Scotsman's Emma Cowing wrote a column this week titled "Shame of Syria first lady of hypocrisy", saying "Asma Assad has more than 34,000 “likes” on Facebook. Not bad for the wife of a man who has been systematically murdering his own people for the past 11 months."

As Cowing notes, the Assad PR push began to crumble a year ago. "Last February she was infamously profiled in American Vogue, where she was described as 'glamorous and chic' and 'the freshest and most magnetic of first ladies'. In the article – now curiously deleted from the Vogue website – she explained how she ran her household on 'wildly democratic principles'."

Erin Burnett OutFront found an existing copy of the text of the Vogue article online here.

After the Vogue story, and amid the continued bloody crackdown in Syria, Assad's office emailed a statement to the London Times in February after it ran an article asking: "What does Assad’s wife, an intelligent, educated woman raised in liberal Britain and seemingly dedicated to good works, think of the evils being perpetrated daily across Syria [...]? Is Asma Assad, 36, indifferent to the suffering being inflicted on her fellow Sunnis by her husband’s Alawite henchmen – or appalled? Has Syria’s Princess Diana become its Marie-Antoinette?"

A few weeks ago Mrs Assad sent a letter to a British newspaper saying that she “filled her days listening to and comforting the victims of violence”. Her tone seemed to suggest that she was somehow innocent in all this, that Syria was under bombardment from evil terrorists and that she, as first lady, was doing what she could to help.

This is patently nonsense. Mrs Assad is almost as complicit in the slaughter of peaceful Syrians as her husband, helping prop up the regime through social networking and by publicly supporting her husband.

Just weeks before, CNN again profiled Assad, asking whether she would speak up–or "stand by her man." Her choice seems coldly clear.

Her former friends in all the right places can now see her–and Syria's regime–for what she is, designer dresses and elegant shoes notwithstanding.

The days of meeting with royalty and gazing admiringly at exhibits of Monet are over. Assad can no longer expect to appear at a humanitarian fundraiser or edgy art gallery opening without being peppered by questions about the senseless deaths of mothers, fathers, and children in places like Homs.

As Cowing described the evacuation of Paul Conroy, a British photographer injured in Homs in the same blast that killed Marie Colvin, "Conroy’s evacuation happened despite, not because of, Mrs. Assad’s actions. As a British-born woman with the ear of the president, she could have helped. Instead she chose to condemn the journalists for having been in the country in the first place...in the same way, by not speaking up for them, she is now condemning thousands of innocent Syrians to death.

"She should be thoroughly ashamed of herself."