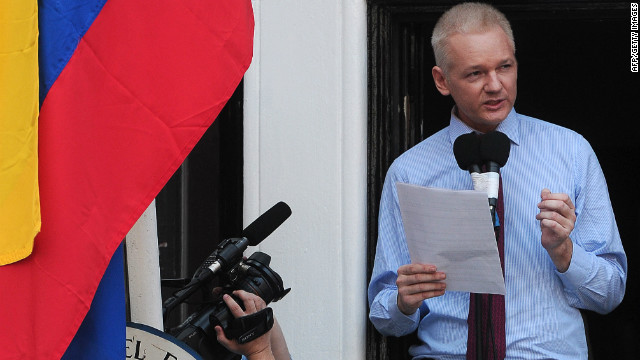 It has been more than five months since Wikileaks founder Julian Assange took refuge in Ecuador's embassy in London - an attempt to avoid extradition to Sweden over sexual misconduct allegations.

"It is a serious issue that Senator Lieberman or Peter King or any other crazed right-wing extremists in the U.S. can apply an economic death penalty to any European company or organisation of their choice without any accountability, " said Assange.

Assange went on to tell British media outlets that even though it's a financially difficult situation - the whistle-blowing site will not close its doors.

Assange: How notoriety has changed a trapped man

Assange is out with his new book 'Cypherpunks: Freedom and the Future of the Internet.' The book discusses how the internet can be used as an instrument of freedom and oppression.

Tune to Erin Burnett OutFront on CNN for the full interview.

Marvin Miller, The Man Behind the Big Bucks in Baseball, Dies at 95

Miller, who died Tuesday is known to for creating a model for unions in America and bring free agency to the MLB.

Look for more of Avlon's thoughts in his latest column, including why he thinks Miller deserves to be in the Baseball Hall of Fame.

Big news for North Korea. It's leader – Kim Jong-Un has been named the Sexiest Man Alive.

The major American media source behind his crowning wrote: "With his devastatingly handsome, round face, his boyish charm, and his strong, sturdy frame, this Pyongyang-bred heartthrob is every woman's dream come true..."

As you can imagine, the Communist press was delighted to hear one of their own was selected for this honor and China's "People's Daily" ran with the story, publishing a 55-page photo spread of Kim Jung Un's sexiest moments.

There's just one problem. The American media source that named him the Sexiest Man Alive was The Onion.

If you don't know, The Onion is a newspaper and website that publishes satirical stories. The whole thing was a joke.

Susan Rice, the U.S. ambassador to the United Nations met with Republican lawmakers Tuesday about her remarks on Sunday talk shows following the September 11th attack on the U.S. consulate in Benghazi, Libya that left four Americans dead, including U.S. Ambassador Christopher Stevens.

One lawmaker said the meeting left him with more questions.

"All I can tell you are that the concerns I have are greater today than they were before and we're not even close to getting the basic answers," said Sen. Lindsey Graham (R-SC).

Two former top Republicans in Florida are speaking out and accusing the state's GOP of passing a law last year that was designed to limit the Democratic turnout, not to curb voter fraud.

That law lead to confusion on election day and long voting lines.

One of those leaders making allegations is Republican Party of Florida Chairman Jim Greer.

"When those consultants approached me about putting forth election changes to the law that would benefit the election party, I didn't agree to it," Greer said. "If you'll note after Christ was forced out after I was forced out, they all got together, and in 2010 is when they passed the election laws."