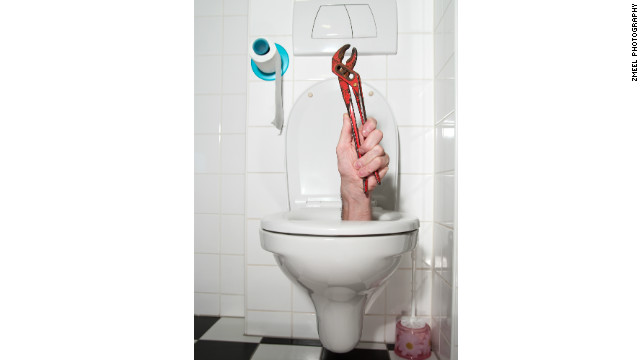 Thieves are snatching everything Apple-related out here in New York City, and the superfluity of Jobs’ highly-coveted electronic gadgets is purportedly what’s to blame for the slight increase in the city’s annual crime index.

According to Mayor Michael Bloomberg’s weekly radio show, Apple product thefts alone (“not Galaxies,” Bloomberg was quick to highlight) accounted for a 3.3 percent jump in major crimes in the city, with an increase of 3,890 Apple thefts.

The company’s flagship store in Paris was overtaken on New Year’s Eve by masked and armed robbers, who, according to the French press, escaped with an estimated whopping $1.3 million in merchandise.

But it’s not just Apple products thieves are taking a bite out of.

In the “things-you-can’t-make-up story department,” robbers in Roseville, Michigan are after shiny objects of an entirely different kind: pipes.

Specifically, the thieves are targeting plumbing fixtures and valves from public restrooms around the city.

Roseville Police Chief James Berlin tells OutFront that an unidentified 25-year-old male has been entering men's restrooms during afternoon hours and using tools to expertly remove exposed piping and valves that lead to the urinal and toilets.

“Whoever is doing this obviously has some plumbing knowledge,” says Berlin, adding that the burglars turn off the water in the restroom and then make off with the hands-free flush controls.

Authorities confirm that the bathroom bandits have already terrorized a McDonald’s, a Tim Hortons, and a McMobil gas station on December 27, 28 and 29.

Berlin says he has never come across such an unusual case.

No arrests have been made in the case and Roseville Police encourage anyone with information to come forward.

I’m no betting woman, but if the ludicrousness of these robbers’ crimes was being ranked according to high-stake poker moves, I’d say they take the [toilet] cake for a Royal Flush.

RT @johnismay: “President Biden has said now four times that we would defend Taiwan, but each time he says it someone walks it back [...] s…
ErinBurnett

9:05 pm ET October 4, 2022 RETWEET
Oh wow. I hope the trip is amazing. I’m so happy - and I 🙏 the bag delivers on its promise and expands to fit ytwitter.com/i/web/status/1…ODl2eHe
ErinBurnett