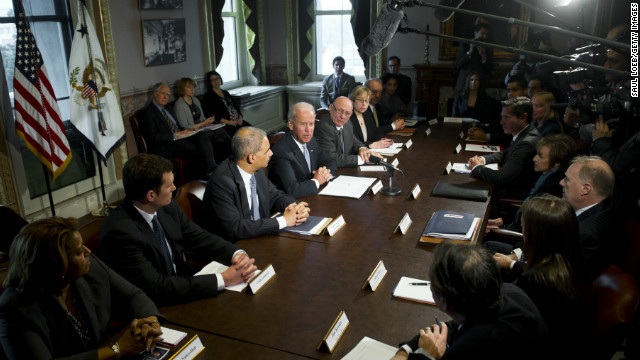 "Common ground exists between the White House and the NRA on gun control," says John Avlon

The Obama administration is set to meet with the leading members of the gun industry, including the National Rifle Association, to talk gun control.

In his latest column for CNN.com, John Avlon cites three areas where the administration and the NRA can find common ground.

Three areas where Biden and NRA can find common ground

Joe Biden doesn't much like the NRA - and the feeling is mutual.

But on Thursday the NRA will be coming to the White House to meet with Biden and his fast-track gun reform task force, formed after the Sandy Hook Elementary School massacre and due to submit its recommendations by the end of the month.

There are obviously deep divisions between the two - they are never going to agree on the vast majority of proposals, especially the assault weapons ban (despite the fact that it was once backed by Ronald Reagan) and a ban on high-capacity ammunition clips.

But there may be some surprising opportunities to find common ground, even on this most contentious issue. The NRA has backed specific plans to crack down on gun violence in the past that the president could enact through executive order, and polls of NRA members suggest there is even more unexpected common ground to be found.