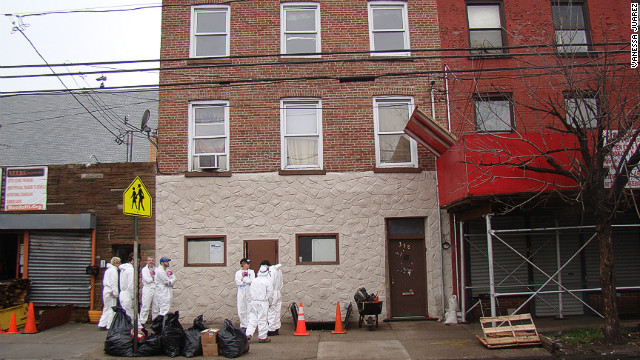 (CNN) It's been 79 days since Superstorm Sandy ravaged the Northeast, and still, some people in the New York City area are without heat and hot water. A simple thing like grabbing a midnight snack out of the refrigerator remains elusive for some people.

I saw the struggle firsthand over the weekend when my fiance and I took a volunteer shift to help some homeowners edge back from the brink. We were in Red Hook, a neighborhood in Brooklyn known for its industrial waterfront, taco trucks, Ikea and in recent years, its artists and artisan foods.

FEMA funds are quickly drying up here in this "Zone A" area, a high-risk designation that means flood insurance is limited and incredibly expensive if it's available at all.

Many neighborhood staples are still struggling - from the 40,000-square-foot Fairway supermarket, which remains closed, to the mom and pops that line the Main Street here known as Van Brunt.

That's where we were staked out.

We first met Scott, an artist and father of two. He owns a commercial space that faces Van Brunt. Through a side door and down a walkway is a small, square courtyard that separates the business from his home. It's a common setup, he tells me, from the old days when business owners retired to their carriage house after a long day's work in their shops.

What sits here now is a foundation nearly century old, and on top of it, a contemporary house made of steel and floor-to-ceiling windows. In the courtyard are remnants of the debris that washed in during Sandy. A number of baseball hats bobbled in water about a foot beyond my 5-foot-2 frame. Now they hang on tree branches as a sort of reminder of what came through.

On the first floor of Scott's home, books line the walls of shelves built in from floor to ceiling. Many art books were destroyed. Through the library is the backdoor to the backyard. Here, on the door's window, you can see where Sandy topped out. A line across the window marks the spot.

It took a month after Sandy, Scott says, to get his house up and running. He says all of the $20,000 he received from FEMA went to replacing the boiler. With a slight grimace, Scott says they thought they had flood insurance. They didn't. Instead, the rest came out of his own pocket. He doesn't think he'll be able to rent out the commercial space any time soon, if ever. It needs a new boiler, too. Still, Scott is faring better than many others who took a hit from the storm.

Next door to Scott lives a man named Tony and his mother.

When we arrive at their third-floor walkup, Tony boots up a generator. He's still without electricity. While we wait, a pit bull chained-up on the first floor is barking at us. He's a warning, no doubt, to any potential looters. Tony has gotten a lot done: He’s gutted the first floor, including bringing down the sheetrock, but he needs help with debris that flooded the crawl space beneath the house.

For nearly four hours, about a dozen of us haul out wood scraps and pieces of concrete from a dark, damp space that was so small that it required bending over at no more than 90 degrees. A shoe here, a broken chandelier there, a Killian's Red Irish bar pull over there. Someone asked: “Where does all of this stuff come from?”

Tony helped out, too, and at one point tripped over some garbage but caught himself. "Not bad for a big man. … I still got it." Tony was all too grateful. He thanked us a million times over. As we left for the day, he and a few friends got ready for lunch, firing up a makeshift stovetop in what was once probably the living room.

What my fiance and I learned is that people continue to need help - whether it's in small ways like this or in receiving more federal aid.

Today, the U.S. House is expected to vote on an additional aid package of $51 billion. We've reported on the pork in the bill, so whether that amount is necessary is an issue up for debate. And there will be gridlock on the Hill today, no doubt. Either way, I'm sure Scott and Tony are holding out hope for the best.