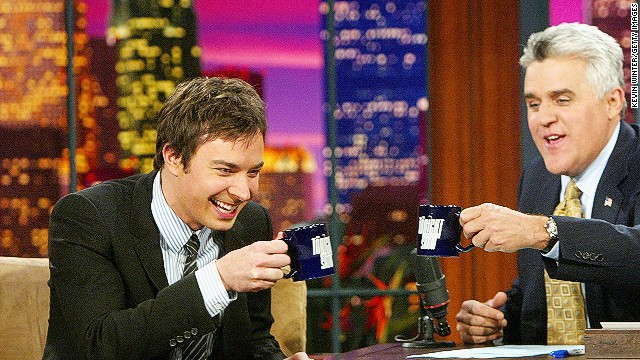 "NBC has been desperate to avoid a repeat of the circus-like atmosphere that accompanied previous transitions on “Tonight." – New York Times, 2013

"One of the main inspirations for concluding the deal this early was NBC's conviction that it could not go through the painful and at times embarrassing process that attended the last decision to turn over the host job on "Tonight." – New York Times, 2004

In a statement released by NBC on Wednesday, the network announced that:

“Jimmy Fallon is a unique talent and this is his time…he will become the sixth host of ‘The Tonight Show’ at exactly the right moment, in conjunction with our coverage of next year’s Winter Olympic Games from Sochi, Russia.”

Fallon replaces Leno on 'Tonight Show,' but the joke's on Letterman

Jay Leno seconded the sentiment with his own statement, which read:

“Congratulations Jimmy. I hope you’re as lucky as me and hold on to the job until you’re the old guy. If you need me, I’ll be at the garage.”

Of course, Leno said similar things when Conan O’Brien replaced him in 2009.  And we know how that turned out.

So, what can Jimmy Fallon do to avoid another late night war with Jay Leno?

Today was one of the most exciting days of my life. I read every tweet and every post and I thank you.

END_OF_DOCUMENT_TOKEN_TO_BE_REPLACED

President Obama is getting some heat for his comments about California attorney general Kamala Harris. In a fundraiser last night, the President said:

"She's brilliant and she's dedicated, she's tough. ... She also happens to be, by far, the best-looking attorney general."

The President went on to say "It's true! C'mon." Some called the comments inappropriate. Others said they were sexist.
So less than 12 hours later, White House Press Secretary, Jay Carney responded to the backlash.

"He called her to apologize for the distraction created by his comments. You know, they are old friends and good friends and he did not want in any way to diminish the attorney general's professional accomplishments and her capabilities," Carney said.