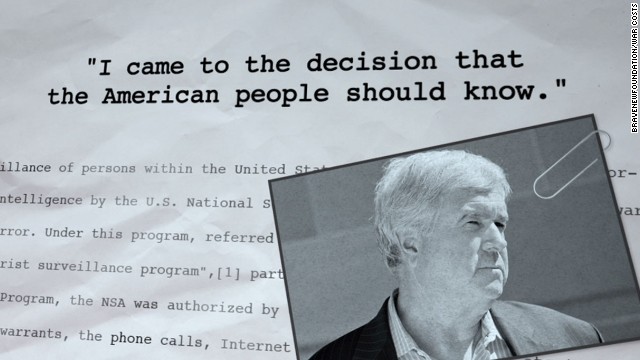 Documentarian Robert Greenwald's flashy films have been described as "liberal pieces of agit-prop," but in his latest film "War on Whistleblowers: Free Press and the National Security State," both the Obama and George W. Bush administrations are in his crosshairs for their lack of transparency and their willingness to make examples out of whistleblowers in a post 9/11 world. And there's a big pond to fish from: nearly a million people have top-secret clearance, according to the film.

Greenwald has previously made documentaries about Fox News, Wal-Mart and the Koch Brothers under his advocacy organization Brave New Foundation, but he insists everybody and everything is fair game, so long, he says, as he's exposing weaknesses in the system. I spoke with him earlier this week about the "War on Whistleblowers."

CNN: What was the catalyst for this project?

Greenwald: We became aware of the crackdown on whistleblowers. It was troubling but it didn’t seem at first blush like there was enough for a film. Then through research and reading, we began to realize that the crackdown on the national security whistleblowers was directly related to the power, influence and expansion of the national security state. One of most important elements was every single whistleblower that we interviewed told a version of the same story, which is they’d seen something, they’d heard something, they realized they could not in good conscience remain silent, they tried to reach out, they tried to report, going through channels where they worked and they came up against a stone wall. And what each one of them did was they turned to the press.

CNN: What is your message?

Greenwald: What we always hope they get out of [our] movies is an understanding about how something works that they didn’t have before, what we often call an ah-ha moment. Then hopefully that then encourages them in whatever way they choose to go out and get involved. You know, there’s a great quote, which is "democracy is not a spectator sport." The films fail if the only thing that happens is people see them and say, "oh what a wonderful movie."

CNN: Thomas Drake, who is in your film, was an exec at the National Security Agency who blew the whistle on mismanagement at the agency, leaked it to the press and was then indicted on espionage charges. He was sentenced to a year of probation - but now the only work he can get is at an Apple store. On the one hand it seems you’re trying to shed light on what seems like an ethical lapse – that these people lost their jobs for speaking out - but on the other, it sort of serves as a cautionary tale that this could happen if you come forward with information, which could prevent people from speaking up. Was this a dilemma for you?

Greenwald: I think you’ve identified a very important part of this story. We don’t want to say to people, blow a whistle and the rest of your life will be flowers and champagne. There are indeed consequences. Some people will decide the personal consequences are too great and other people will decide the consequences of remaining silent in the face of injustice or corruption or breaking the law is even greater. So we want to paint a realistic picture. You have to make a decision what is the line you won’t cross.

CNN: How much do these cases have to do with money and politics – that anything perceived to be government waste is bad for politics and so a failing government project often leads to trying to keep whistleblowers at bay?

I think on the political side, you have people focused on partisan politics, and they are also vested for a slightly different set of reasons in making sure that anything critical doesn’t get out into the world. That’s particularly sad because they’ve sold out their ideas, they’ve sold out their beliefs and are now just focusing on bottom line electoral politics rather than what’s right and what’s wrong.

CNN: This film is critical of both the George W. Bush and Obama administrations, but a point is definitely made about how transparency was supposed to be the touchstone of Obama’s presidency. Are you disappointed with how his first term played out?

Greenwald: You saw the quote from the President [that his administration would be "the most open and transparent in history]. I think it’s important to raise that and make noise and point out the space bet the words and the actions.

CNN: What do you think changed with Obama over the last four years that led to this space between his words and his actions?

CNN: Would you divulge whether you voted for Obama?

Greenwald: Um, I think you’re not supposed to in the journalist world. I’m transparent about everything but I’ve noticed that quite a few people that do investigative reporting try not to take a position. It’s certainly public that we did some investigative videos that were very critical of McCain. We did the first video that pointed out how many homes he had, which led to quite an outpouring of attention.

CNN: Well, we’re all biased, right? It’s a matter of whether we're able to acknowledge that and take a step back from our biases. And so, I imagine some people are curious about your political leanings and whether you’ve decided to keep them out of your films?

Greenwald: Everybody’s biased; everybody has opinions based on our parents, our family, our upbringing, our schools, what’s the last book we read. I definitely have a general way that I look at the world as many people do. I try not to let that ever interfere with the facts. People will disagree with our movies, which is fine. They will criticize them, which is fine. But we’ve not been attacked on our facts because we go to great, great lengths to make sure the facts are all double and triple checked. Sometimes people call our [journalism] advocacy journalism because we want people to do something [after seeing] our movies. Some people feel that’s not proper. I think it’s important for all of us to be open to the possibilities and the radically, radically changing world of journalism.

CNN: When I Google “Robert Greenwald,” a link to Brave New Films comes up… and the tag line for it is “The best progressive political videos on the web, with no commercials.” What does “progressive” mean to you?

Greenwald: What “progressive” means to me is a way of looking at the world from the perspective of how do we make it a fairer and better place for everybody.

RT @CNN: Trump spent hundreds of days of his presidency at his personal properties, Mar-a-Lago above all others. @tomforemancnn reports on…
OutFrontCNN

8:59 pm ET August 9, 2022 RETWEET
RT @CNN: “It’s pretty clear that what the Chinese are doing is they’re indicating exactly how they’re going to go about this.” Retired Col…
OutFrontCNN