The FBI is releasing new information about Israel Keyes, the 34-year-old who confessed to as many as eight murders across the country last year.

Investigators have added three more people to Keyes' list of victims, bringing the count to as many as 11.

Keyes committed suicide in December while awaiting trial and without a suspect to question, federal agents may be left with more questions than answers.

Nick Paton Walsh is OutFront with the story.

Sen. Rand Paul: I am no birther

Paul happy with Palin praise; stays out of Cruz debate

In an interview on CNN's "Erin Burnett OutFront," Paul also said Tuesday he plans to stay out of the debate over whether his fellow Republican colleague Sen. Ted Cruz would be eligible to run for president.

OutFront: Kentucky Senator Rand Paul. He has a new book called "Government Bullies: How everyday Americans are being harassed, abused, and imprisoned by the feds."

Filner is accused of sexual harassment by more than a dozen women, and calls for his resignation have grown louder and louder by the day.

But in a new twist, CNN has discovered that some of Filner's alleged liaisons - from bar tabs to international trips - may have been paid for with taxpayer money. 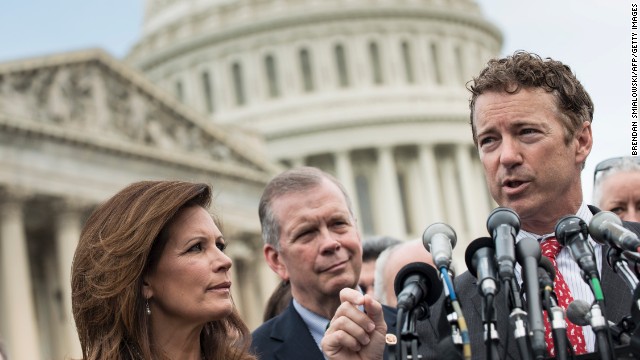 Paul has frequently appeared on CNN's Erin Burnett OutFront and we wanted to put together the top 5 issues Sen. Paul has discussed on the show.

After a filibuster that lasted 12-hours, 52 minutes and 11 seconds, the man who staged the "rand-page" declared victory when Attorney General Eric Holder assured him that the president cannot use a drone to kill a noncombatant American on U.S. soil.

At President Barack Obama's first press conference after being re-elected, he addressed critics of U.S. Ambassador to the United Nations Susan Rice's testimony on the Benghazi attack on Sunday talk shows. Republicans say they would block her nomination to Secretary of State – claiming she misled the American people.

At a major foreign policy speech in Virginia, Mitt Romney laid out an aggressive new position on Syria, saying that as president, he would want to see that Syrian rebels "who share our values" are armed with the help of the United States. Sen. Paul tells Erin Burnett that Romney was wrong on the Middle East and is against American intervention in Syria.

Senator Rand Paul (R-KY) introduced two amendments in the Senate that would terminate U.S. aid to Pakistan, Egypt and Libya. Sen. Paul's new amendments were announced in the wake of the recent attacks on U.S. compounds in Egypt and Libya.

Sen. Paul weighs in on tax reform, telling Erin Burnett that with simpler tax code and rate, he is fine with some American paying more in taxes.

Tune in to Erin Burnett OutFront at 7p ET on CNN for the full interview with Kentucky Sen. Rand Paul.

The Best Political Gaffes: Memorable moments politicians would like to forget

Erin Burnett reports on Australia's opposition leader, who received some unwanted attention for a slip of the tongue.