When 14-year-old Ayvani Perez was found safe and in good health Wednesday, the focus of the investigation quickly shifted to the suspected kidnappers.

CNN has learned one of the suspects in custody was also arrested last year with Perez's mother during a drug bust.

Perez was abducted during a home invasion on Tuesday and investigators now believe it wasn't random.

Our Martin Savidge is OutFront with the latest.

11 days until a potential government shutdown

The countdown is on. The United States has 11 days until the government shuts down.

What does that mean for America?

Republicans say they have a plan to keep funding the government, but only if funding for Obamacare is taken out of it.

It's a nonstarter, a guarantee of a shutdown. 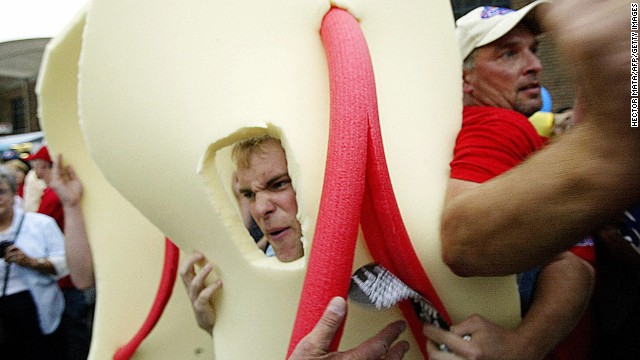 The most dangerous footwear... ever

A California town has declared war on flip-flops.

San Juan Capistrano recently opened a dog park with a sign listing the park rules, which includes "NO FLIP-FLOPS."

This angered the town's sandal-wearing community and they demanded city officials explain why flip-flops are banned.

And the parks commission was quick to respond.

None of the city officials can remember why or how the flip-flop ban started. It's been on the books for years but never actually enforced.

And Commission Vice Chairwoman Jenny Friess told the L.A. Times: "I wouldn't think twice about going into the dog park in my flip-flops. I don't think we need to really be telling people what to wear on their feet."

So I checked into it and, it turns out, the reason is simple: Flip-flops are the most DANGEROUS FOOTWEAR EVER.

Study after study has shown that regularly wearing flip flops is really bad for your feet. Heel spurs, stress fractures, tendonitis and a host of other ailments are cited as conditions caused by them. They're worse than high heels and platform shoes.

And it's not just you you're hurting. You're risking the lives of everyone on the road with you.

According to a recent study in Britain, wearing flip-flops while driving can reduce response time by 0.13 seconds.Every year 1.4 MILLION traffic accidents or near-misses are caused by drivers in flip-flops.

Still not convinced?
Well, just think back to the 2004 presidential campaign, when the flip-flop single-handedly (or single-footedly, as it were) derailed John Kerry's campaign.

"Messiah" allowed to keep his name

A judge ruled that forcing parents to change the name of their child was unconstitutional and Messiah can keep his name.

"It's very troubling...those 80 million votes that President-elect Biden had, have been confirmed," says Ben Hovlan‚Ätwitter.com/i/web/status/1‚Ä¶Ub
OutFrontCNN

9:01 pm ET November 27, 2020 RETWEET
"My sorrow should be your lesson. I don't want anybody to have to go through this, what we had to go through as a f‚Ätwitter.com/i/web/status/1‚Ä¶Re
OutFrontCNN

8:06 pm ET November 27, 2020 RETWEET
"We've made clear to the people of Georgia that [GOP Sen.] David Perdue is a crook who has abused his office... But‚Ätwitter.com/i/web/status/1‚Ä¶uS
OutFrontCNN

8:57 pm ET November 25, 2020 RETWEET
"It is delusional," says @JohnAvlon of Trump claiming he won the election by a lot. "It's a political equivalent o‚Ätwitter.com/i/web/status/1‚Ä¶eR
OutFrontCNN

8:07 pm ET November 25, 2020 RETWEET
"This is going to absolutely devastate and decimate our industry. We can't keep taking on these blows, especially w‚Ätwitter.com/i/web/status/1‚Ä¶pb
OutFrontCNN