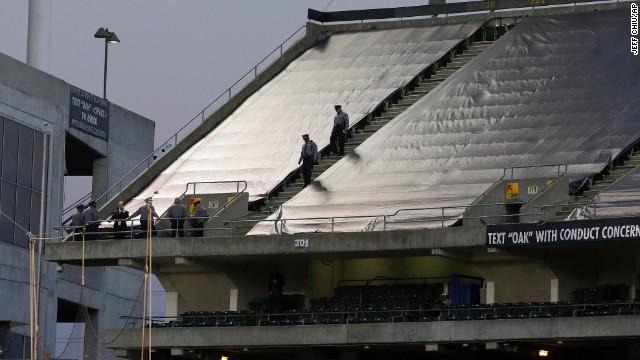 Two people are recovering after a 61-year-old veteran broke the fall of woman who jumped from the upper deck of the Oakland Coliseum following a Raider's game.

Sunday's incident came just one week after another fan fell 30 feet from the stands at a Buffalo Bill's game.

Are these just fluke accidents or does something need to change to minimize the possibility of fans falling.

There have been several incidents this year alone.
• On November 24, the day of the woman's fall, a 48-year-old man suffered severe head injuries after falling down steps at the M&T Bank Stadium in Baltimore at the Ravens game against the New York Jets.

• On November 17, a Buffalo Bills fan fell as he tried to slide down the rail of the upper deck of Ralph Wilson Stadium, dropping about 30 feet. He injured himself and a fan he landed on.

• On October 24, a woman fell about 20 feet from the stands at Floyd Stadium at a game at Middle Tennessee State University.

• On August 12, a man fell about 85 feet from the upper level of Atlanta's Turner Field. The death was ruled a suicide.