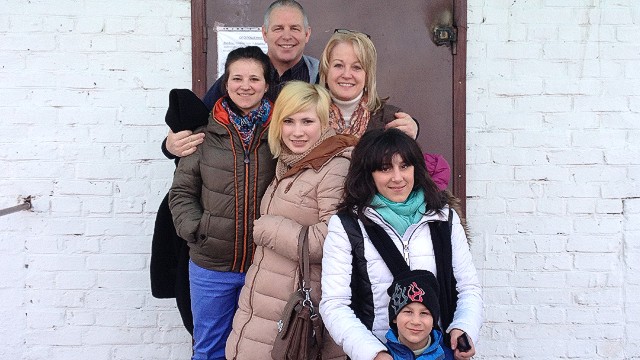 American couple stuck in Ukraine after adopting four orphans: "I could see the glow of fire"

(CNN) - Trapped. That's how Don and Lisa Jenkins of Topeka, Kansas are feeling as they hunker down in an apartment in the Ukraine. They are trying to adopt four children amid a revolution - and it hasn't been easy. Their biggest challenge? Getting government records and the sign-offs they need in a country that is essentially without a government. Ukrainian President Viktor Yanukovych has fled the country and interim officials say a new government will not be put in place before Thursday.

So Don and Lisa Jenkins wait.

The American couple first visited Kiev around the time the protests started, in November, to jumpstart the adoption process. After picking up the children from an orphanage in a small Ukrainian village earlier this month, they arrived in Kiev for a second time to sort out the remaining paperwork. What they didn't know is the situation on the streets was about to take a turn for the worse.

For a week, the Jenkins family has been on the frontline, holed up in an apartment a half-mile from Kiev's Independence Square. This is where the most violent clashes occurred last week - where buildings and people were lit on fire, hostages were taken, limbs and lives were lost. All they had to do was look out of their window to see just how close to the violence they were.

"If I looked out the bedroom window, I could see the glow of fire,” says Don Jenkins. “At that point, we're scared to death. That one morning, like at 4 o'clock, it really got out of control and they started throwing firebombs in the buildings."

There have been many anxious moments. One day, his wife Lisa and the girls were going out, and as they stepped out of the apartment building, they were met with as many as 75 protesters. “The kids ran back in,” says Jenkins. “At that point, we’re just going to stay in.” His wife came back up and filmed the protesters going by from the window.

“This is supposed to be a very happy time in their life,” says Jenkins. “All they wanted was a family. So we’ve been celebrating the whole way, and then we come up to Kiev and on the first day we’re here, we can’t go outside in fear of our lives because we don’t know if the protesters are going to expand. We were told they were attacking government buildings, but all the buildings are pretty dilapidated and it’s hard to tell a government building from a regular building. We're trying not to look frightened in front of the kids because we don't want them to be worried.”

But they are worried. One child asked Lisa, "Does this mean we're not going to America?"

The children have already been through a lot. Two girls had two previous adoptions fall through. “Even when we told them we were going to adopt them, there was still a lot of doubt,” Jenkins says.

'We were trapped': Eyewitness to the massacre in Kiev

They are also adopting an 8-year-old boy named Roman. He has microcephaly, a rare neurological condition in which a child's head is significantly smaller than normal for his age. Before landing at the orphanage, authorities found Roman living in deplorable conditions. "At the age of 5, he was living in a dog house," Jenkins says. “Everything he ate, he dug up out of the ground himself. He’d never been taught to eat off of a plate. Never bathed himself. The parents would be gone all day and when they would come home they would give him a smoked pig’s ear to chew on. That was his meat for the day.”

Since being at the orphanage, Roman had greatly improved - so they were conflicted about adopting him and interrupting his progress. “Our thought was, is it really wise to pull him out and take him to a country where he’s going to have to learn a new language,” Jenkins says. “We prayed about it, and we asked for a sign. We wanted God to let us know what the decision should be.” During a second visit to see Roman, they hadn’t gotten the sign they were looking for – until Don was saying his goodbyes. “I got down on my knees because he’s so tiny,” he says. “Someone said, ‘give papa a hug’ and he ran to me and leapt into my arms and would not let me go. I lost my composure, my wife’s crying, the teachers are crying, the kids are crying. I thought, ‘this one’s coming home with us because there’s no way I’m telling him no after this.’”

The Jenkinses may be saviors to these children, but in Kiev, they feel helpless as parents. “Here we’re taking these kids into our family and I don’t feel we can adequately protect them,” Jenkins says. For a couple of days, all they had to eat was the junk food they’d had in a knapsack: potato chips, chocolate, and soda. To pass the time, the kids would play on their iPhones. Now that the situation has eased, the family can venture out to the supermarket, and they even took the kids to the mall to give them a reprieve from feeling like they are under siege. When they go out, they let the children gab in Ukrainian so that they fit in.

The family is slowly making progress with the Ukrainian government. They have two passports for two children and are hoping to get the remaining two this week. Back home in Kansas, they have two grown sons waiting for their return. They’ve missed two months of work at Burlington Northern Railroad and are not getting paid. Don is already using up his last vacation days for 2014. “We’re here spending money to sit in a room and do nothing,” Jenkins says. “We’ve been putting things on credit cards... but you know, I would do it all over again. These kids are priceless.”

When the Jenkinses finally do get back to Kansas, the first thing they’re going to do is have Christmas for the kids. “We left the tree up,” says Jenkins.

A thousand feet about the earth, a pilot got the shock of a lifetime when a bird came crashing through his windshield.

It was all caught on tape, and CNN's Jeanne Moos has the story OutFront.