There are new questions about why the captain of the South Korean ferry Sewol was not at the helm as the ship went through the most treacherous part of the trip.

The third mate was at the helm when the ship capsized. According to the New York Times, she's a 26-year old who had no experience navigating a waterway known for its rapid currents.

And it was only by chance that she was in charge - it just happened to be her shift when the ship got in trouble.

Chad Myers reports on why the waterway is so dangerous.

In Nigeria, the mass abduction of schoolgirls isn't shocking

The government is under fire after first saying nearly all the girls were free - then retracting that claim.

Vladimir Duthiers has the latest from Abuja, Nigeria.

The death toll is rising as we learn more about the chaotic moments a ferry capsized off the coast of South Korea.

Officials say at least 104 bodies have now been pulled from the underwater vessel. Most of them teenagers on a class trip.

Divers who can barely see their own hand in front of their face are now battling strong currents as they make their way in and out of the ship - searching for the remaining 198 passengers.

Back on the surface, radio transcripts are providing a harrowing account of the tragedy that has now resulted in the arrest of 7 crew members, including the captain.

Our Kyung Lah is OutFront, live in Jindo South Korea with the latest. 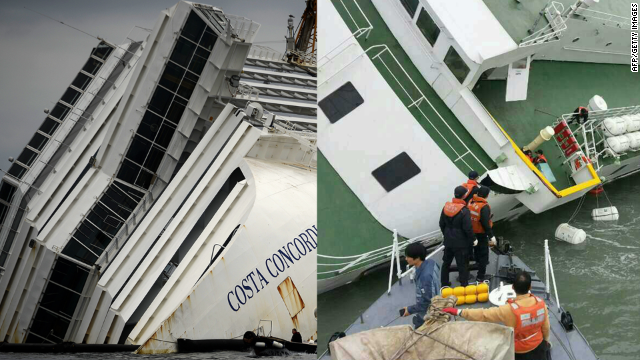 The underwater drone in search of Malaysia Airlines Flight 370 wreckage has begun its ninth mission.

So far, the Bluefin-21 has scanned about two-thirds of the intended territory without finding any sign of the missing plane.

Oceanic salvage manager: How we search for Flight 370

If any debris is found, the next step could be a manned mission to sift through potentially hundreds of tons of wreckage on the ocean floor.

CNN's David Mattingly is inside a manned submersible to takes us through the process of cutting through debris to get to an aircraft's black box.