It's been exactly one month today since Boko Haram terrorists attacked a school in Nigeria, kidnapping nearly 300 girls.

A prominent American politician is now joining a call for U.S. troops to be on the ground in Nigeria.

"I would utilize every tool that we have to rescue these young girls." Sen. John McCain (R-AZ) told reporters. "And that means it would be done surgically, it could be done in a way that is very efficient, but for us not to do that, in my view, would be an abrogation of our responsibilities."

Do you agree with Sen. McCain? Should the United States send troops to Nigeria to rescue hundreds of girls abducted by Boko Haram?

Appraiser: Santa Maria artifacts can be worth hundreds of thousands of dollars

But Clifford now says there's evidence that the ship has been looted.

Photos from an examination of a shipwreck taken off the coast of Haiti in 2003 show the outline of a 15th century cannon, which Clifford says is proof that the remains are from Columbus' legendary ship.

The problem: when he and his colleagues returned to the site, they discovered the cannon and other items may have been stolen.

Who took these artifacts? Is this the Santa Maria?

OutFront, Barry Clifford, the underwater explorer who led the team that discovered the shipwreck, and Sebastian Clarke, an appraiser with the long-running PBS series 'Antiques Roadshow' and CNN's Miguel Marquez.

The former president struck back at Karl Rove after he reportedly said Hillary Clinton may have suffered lasting brain damage after a fall two years ago.

"I got to give him credit, you know, that embodies that old saying that consistency is the hobgoblin of little minds," Clinton said. "First they said she faked her concussion. And now they say she's auditioning for a part on 'The Walking Dead.'"

Bill: Hillary's in better shape than me

Was it smart for Clinton to respond to Rove's brain damage claims? 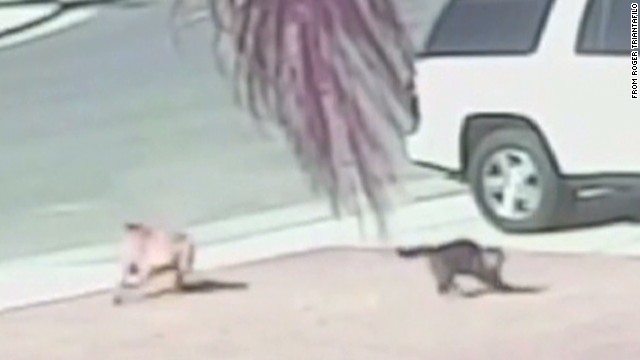 A little boy is attacked by a dog and guess who comes to his rescue?

A dog's worst enemy. No, not the neighborhood mailman, but a cat.

The hunt for Malaysia Airlines Flight 370 is now on hold.

The only underwater search tool, the submersible Bluefin 21, is out of commission.

The Bluefin and its navigation transponder were both damaged this week when the vehicle was being hoisted out of the water.

Now, officials say just getting the parts to the ship could take four days, and it could be longer before the repairs are completed.

There are growing concerns to whether the Bluefin is even searching in the right area.

The plane disappeared 69 days ago and so far - not a single piece of debris.

Tom Foreman has our report.