Our second story Outfront – a meeting of the minds.

Tomorrow President Obama is set to meet with Mitt Romney for the first time since the two faced off in the presidential election. The White House is framing it as a chance for the President to decide whether he wants to include some of Romney's ideas (or potentially Romney himself) as he makes some changes to his administration.

But can these former foes ever work together? Joining us tonight is former U.S. Senator Rick Santorum, who challenged Romney for the Republican nomination.

Who will lead the post-Romney GOP?

Following some big election day losses, the question remains – what exactly is the Republican Party of the future?

Former Secretary of Commerce Carlos Gutierrez – who led Romney's outreach to Hispanic voters – has some thoughts and spoke to CNN's Candy Crowley today in an interview set to air Sunday on "State of the Union". END_OF_DOCUMENT_TOKEN_TO_BE_REPLACED 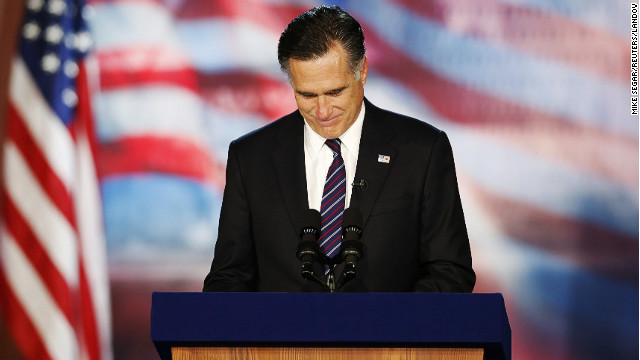 Former presidential candidate Mitt Romney told his top donors Wednesday the reason his campaign lost the election was because of 'the gifts' that President Barack Obama gave to young and minority voters.

“With regards to the young people, for instance, a forgiveness of college loan interest, was a big gift…Free contraceptives were very big with young college-aged women. And then, finally, Obamacare also made a difference for them, because as you know, anybody now 26 years of age and younger was now going to be part of their parents’ plan, and that was a big gift to young people."

In his latest column for The Daily Beast, John Avlon writes Romney's latest comments reveal the mind of a salesman – a salesman that  depending on the audience has the remarkable ability to change his pitch.

END_OF_DOCUMENT_TOKEN_TO_BE_REPLACED

After almost two years and a whole lot of money, was record campaign spending worth it?

Karl Rove is on the ropes.

The man who spent years on top of the conservative political world has fallen somewhat from grace after his Super PAC this year spent a colossal amount of money with limited results.

In fact, American Crossroads was the biggest loser among outside spending groups this year, shelling out more than $170 million dollars in races across the country, only 1.29% of which results in winning elections according to the Sunlight Foundation.  END_OF_DOCUMENT_TOKEN_TO_BE_REPLACED

The electoral college: necessary or broken?

CNN contributors Roland Martin and Reihan Salam along with Newsweek/The Daily Beast's John Avlon sit down to talk about the growing chorus of voices calling for a change to the electoral college system.