For most Americans, Afghanistan is synonymous with war, terrorism, al Qaeda, and Osama bin Laden. But this is also a country with incredible history and culture.

As we began researching stories to cover, we learned of an Outfront personal connection. One of our colleagues, a publicist here at CNN, spent the first eight years of her life in Afghanistan during the early 1970's.

Erin Burnett spent some time with her father talking about his life - when Afghanistan was a different place.

A Mother campaigns for Afghan presidency

Erin Burnett sat down with an Afghan woman who is defying death threats as she vies to be the next president of Afghanistan.  Fawzia Koofi, a member of Parliament, tells Burnett why she's motivated to continue her work in politics.

U.S. Army Sgt. First Class Josh Berndt is stationed at the Kandahar air base and is on his second deployment in Afghanistan. CNN's Erin Burnett spoke to Berndt about his thoughts on the future of Afghanistan.

A special message from home

On a special note, Burnett spoke to Berndt's family and gave Berndt a special message.

"Hi dad, I love and miss you. Have a Merry Christmas," says Halle, daughter of Josh Berndt.

Separated by war in Afghanistan, the Berndt family shares their story

There are 68,000 American troops here in Afghanistan, and many of them will be separated from family and friends, for as long as 15 months before they get to go home.

It can be difficult to be away from loved ones for so long, but as I found out, many military families, like the Berndt's, in Washington state, have learned to live with it. 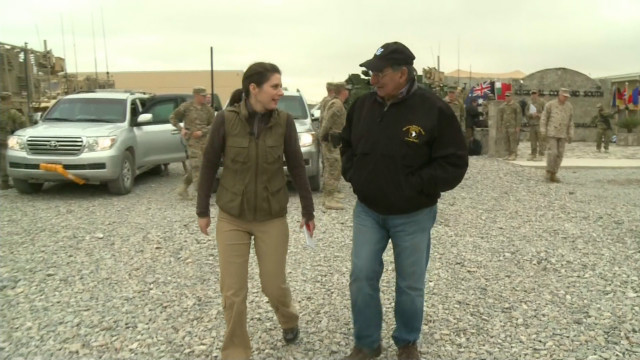 Q & A with Erin Burnett: What comes after 2014 in Afghanistan?

Erin Burnett talks to CNN.com Thursday about what she's seeing on the ground in Afghanistan and about her exclusive interview with Defense Secretary Leon Panetta.

Erin Burnett OutFront is live at 7p ET from Kabul on the future of Afghanistan.

(CNN) America's longest war is expected to conclude by the end of next year, when the United States plans to withdraw all its combat troops from Afghanistan.

But many challenges remain.

Insurgents are still a "resilient and determined" threat, according to a Pentagon report released this week. Afghan security forces must be fully trained to take over for U.S. troops. And the two countries have to come to an agreement over what kind of troop presence the U.S. will have in 2014.

"How this war winds down is very important to Afghanistan, to the United States and so many other countries," said CNN's Erin Burnett, who has been in Afghanistan this week talking to U.S. officials, troops and Afghan civilians. "People paid for this with their lives. People have died, people have spent a decade of their lives fighting this war away from home. And of course, the U.S. has spent about $650 billion on the war alone."

Burnett talked to CNN.com on Thursday about her trip and what she's been hearing from various people about the transition and their hopes for Afghanistan's future. Here is an edited version of the conversation:

CNN.com: You talked with Defense Secretary Leon Panetta on Thursday. What's he saying about the war effort? Has the U.S. accomplished its mission?

Erin Burnett: Panetta points out the success in bringing down key members of core al Qaeda, and he believes he has made real progress on fighting al Qaeda and terrorism in Afghanistan. But he acknowledges that insurgents are still a problem, and he acknowledges that al Qaeda and terrorists have now spread and they're in other places. He specifically mentioned to me Yemen, Somalia and Mali. And he still thinks that al Qaeda is the single biggest threat to the American homeland.